Let’s just jump in with a question could stir up some controversy, shall we?

If you see two preschool kids fighting, should you step in and make them stop?

Prior to listening to a most interesting interview between Stuart Brown and Krista Tippet, I thought I knew the answer. Yes, yes you should stop them. It turns out that fighting, wrestling, and playing are necessary for the soul. I don’t know how you feel about rats, and I’m not asking you to like them, but when adolescent rats were denied this kind of play, it had grave ramifications in their adulthood in terms of knowing who is friend or foe. How much more so in humans? 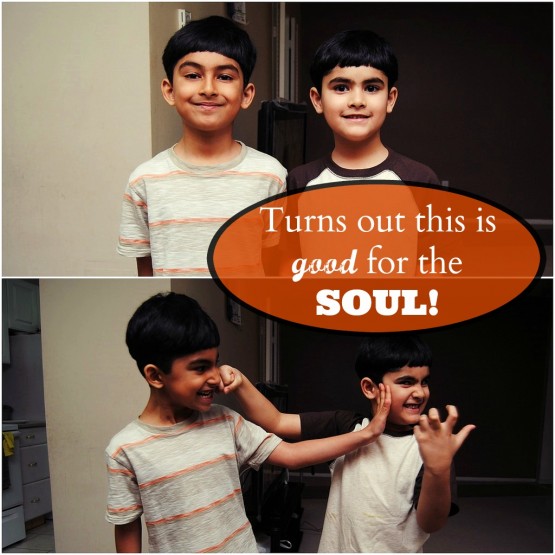 I have two sisters and there are only 31 months between me, the first born, and Laura, the last. We were raised in a herd. I have no memories when there weren’t three of us. And some of those memories include, shall we say, um, fighting. It all changed when Laura went through a growth spurt and outgrew Elizabeth and me. Suddenly hand-t0-hand combat lost its appeal. What our parents didn’t know all those years ago is that we weren’t simply fighting, we were learning trust and empathy and patterns for play that far outlast the fights themselves.

Not convinced, here is the show summary of the podcast:

Who knew that we learn empathy, trust, irony, and problem solving through play — something the dictionary defines as “pleasurable and apparently purposeless activity.” Dr. Stuart Brown suggests that the rough-and-tumble play of children actually prevents violent behavior, and that play can grow human talents and character across a lifetime. Play, as he studies it, is an indispensable part of being human.

Recently I worked with a  group of interns who spent two months playing with and investing in kids from lower income homes. Did they know they were doing far more than filling time? They were fostering trust and problem solving and maybe giving kids skills to keep them out of prison later in life.

Isn’t that empowering! More so than thinking of it as filling time?

Isn’t it?! When you spend time with your kids, nieces, nephews, grandkids, neighborhood kids, kids at church — any kids — you are feeding their very souls.

I have found my mind returning to this podcast again and again. In part because we so often associate the word “play” with childhood. Not so in China. It took a while for my Chinese friends to refer to playing and not internally jolt from the childish or sexual nature this word has taken in association with adults. And isn’t that a shame!

Thanks for many years in China I have reclaimed the vocabulary of adults and play. In the most life giving, soul feeding sense. Why?

We adults need play too. As much as kids do. Regardless of the season. Sure, summer is most often associated with playing; and there is a certain relaxedness to the season, but isn’t it good news that we have been made by God not just for work? And when we are playing, we are not simply resting or relaxing, we are fostering our very beings?

This news touches something deep in me and invites me again to being the type of person I want to be. One who works and plays.

I think this is why I’m drawn to Zumba, reading, card games and the Broncos so much. They foster my personhood in ways work (whatever your work is), simply can’t.

Please listen to the interview. It is one of the rare ones I think could change your life.