I bought my ticket back to the States on Friday. And then I cried.

I’d been putting it off (saying that I’m monitoring prices, yeah, that’s it, monitoring) allowing  me to pretend I live in two realities. One in which nothing will change and the other in which I’m gearing up to help host 15 Chinese students who will be in Denver the last two weeks in July {the former tour group leader in me is having the best time ever planning their two weeks! Many phone calls last week to the Denver Mint, the Pepsi Center, the Capitol, just name a few of the things they are going to experience} and move into a new season of life.

I also made a down deposit with the shipping company who will come on June 20th. I teach my last class June 21st. I board a plane June 25th. I celebrate a niece’s birthday on June 27th. And life goes on.

I taught at Beijing University (Bei Da) in their graduate school of international relationships from 200o to 2004 and on Saturday met with a former student who has returned after earning his PhD in the States. We decided to meet on the Bei Da campus for dinner Saturday evening.

The campus is resplendent now and I arrived early to wander and wonder. 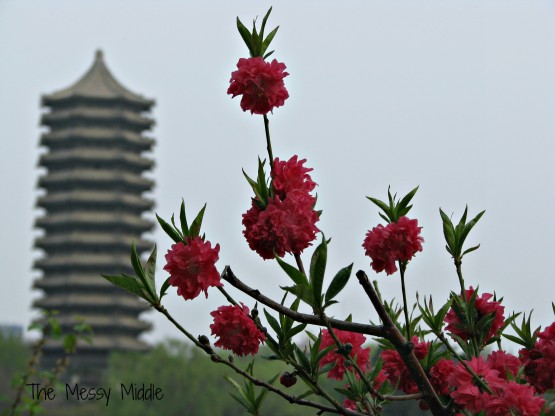 Parker Palmer says that “the soul is like a wild animal — tough, resilient, savvy,  self sufficient, and yet exceedingly shy. If we want to see a wild animal, the last thing we should do is go crashing through the woods, shouting for the creature to come out. But if we are willing to walk quietly into the woods and sit silently for an hour or two at the base of a tree, the creature we are waiting for may well emerge, an out of the corner of an eye we will catch a glimpse of the precious wildness we seek.”

When my soul emerged as I rounded the lake (after I’d charmed my way on to campus since I no longer have a teacher ID), I was a bit taken aback. I “sat silently” though my body moved and thought of Parker Palmer’s words. I knew this was a precious time with God.

I texted two former students with whom I’d had lunch with on a regular basis when they were my students. One now the mayor of Zhejiang, the other a professor of linguistics. They both texted back with fond memories of those lunches and the time we had together. And the Spirit whispered, You haven’t been here for years, yet your investment lives on. So it will be for this move. You need to go to keep building my kingdom and not worry about growing your own.

During dinner I thought the soul would recede as Alex and I hadn’t seen each other for years and we’d have a good deal of catching up to do. And we did. But I found that having stuck her nose out, my soul was brave enough to stay for dinner too.

We didn’t specifically talk about spiritual topics — but there was a connection that was based on both knowing and understanding two cultures. We meandered through Chinese and American concepts such as suzhi (素质), shang huo (上火) — which I now believe in! as I’ve been told repeatedly I have too much heat in my body, China town in Philly versus NYC, and the drivers test in China (they have recently added a fourth component : wenming 文明, meaning civilized, driving), road trips in the US, and other subjects I don’t normally talk about (his dissertation topic surprised me) with Chinese because of the political nature.

I know you might have glazed over that paragraph if you don’t know Chinese or China or really care to. And that is fine and good!

But as it was unfolding, my soul marveled at the gift I was given in that meal and the ways I have been influenced by China. Ways that geography can’t touch.

Thank you for the comments and help with operation “Let’s keep mosquitoes annoying and not deadly.” I loved reading the names of your people. The winner of the drawing is Mike and the two great kids he mentioned (well, actually the winner is the children who will not die due to Malaria)!

Has your soul made an appearance recently? What were the circumstances?