The following was written by my friend Kaylene Powell and when I read it, I wanted you to read it too.

There once was a little mountain goat who loved to frolic, prance, run, and sleep in the wide meadows that were the only home she’d ever known.  In the spring and summer, the flowers were abundant, soft, and lovely, and the grass was sweet and so tasty to eat.  In the winter, the snow was deep and soft and the very purest shade of white.  Nearly every day, the sky above was boldly blue and expanded for eternity from one set of peaks to the next as far as the little goat could see.

All was right with the world. 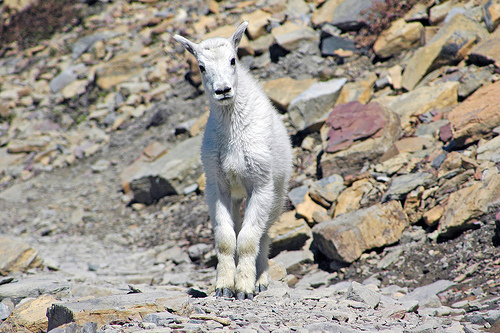 One day, the little goat was called by a voice on the wind.

When she followed the voice, she was led up to the rocky crags.  Here there were no flowers and very little grass to eat.  She had to look long and hard to find food and water.  But while she missed the sweet green grass of the meadow and the rushing streams that always provided clear water, the thing that scared her most about being in this new place was the threat of occasional rock slides.  There wasn’t much snow on top of this mountain, but there were many loose rocks, and sometimes, if there was a clap of thunder or another loud noise (or no apparent cause at all), rocks would start falling down from the peak, picking up speed and sweeping along anything in their path without mercy until the whole mess came to rest in a ravine below.

The little mountain goat was very afraid of those rock slides.  What if, one day, she didn’t hear the rocks in time and she got swept away too?  She started to worry about it so much that she couldn’t sleep well and she was always looking over her shoulder nervously.  After some time of living this nerve-wracking existence, she was in very bad shape.

As she stood nibbling on some moss and roots, she heard the voice that had first called her to the crags speak once again.  It said, “Why are you troubled about the rocks up above, when the mountain under your feet is much stronger and surer and more trustworthy than they?  The One who made the rocks which fall also made the mountain on which you stand and climb and live and breathe.  He will certainly not stop watching over you and counting the woolen hairs–every last one of them–on your little body.  And He longs for you to feel the assurance of His strength under your small hooves when you stand on this grand hillside and look up at the very small rocks that seem so threatening where they lay.  He will surely be your helper, no matter what you may experience in this day or the next.”

The little goat listened intently and heard every word clearly.  For a moment, she hung her head in shame and with a sense of great humility.

But then she opened her eyes and looked down to see the firmly packed soil of that strong and massive mountain under her hooves and she knew in her heart what the wind-voice had whispered was true.  She raised her eyes to look at the loose rocks above her and suddenly she was less nervous than she’d been for some time.  As she continued to live amongst the crags (for she hadn’t been told to return to the meadow), she sometimes faced accidents and hazards and scary moments.  But she never forgot what the voice had told her that day.  So she lived on with joy, knowing that even when things were not easy or sometimes dangerous, she had the firmest foundation possible and she did not have to live in fear.

Do you feel like the mountain goat? Who is someone you could share this parable with and pray for?

Thanks for sharing Kaylene! Amy