“Everyone please look up at the bungee tower to see a foreigner jump!” Said in Chinese over the PA system for everyone in park to hear.

Prior to this, two of my students had asked if I wanted to go bungee jumping. It was a lifelong dream, so this seemed like a fortuitous opportunity. It seemed less fortuitous when we each had a sticker put on our arm with our weight publicly written for anyone to easily see. Even though I didn’t know my weight in kilograms, I found out it was at least 10 to 15 kilograms higher than both friends, a guy and a gal. I was less afraid of falling from a crane than having my weighed displayed. 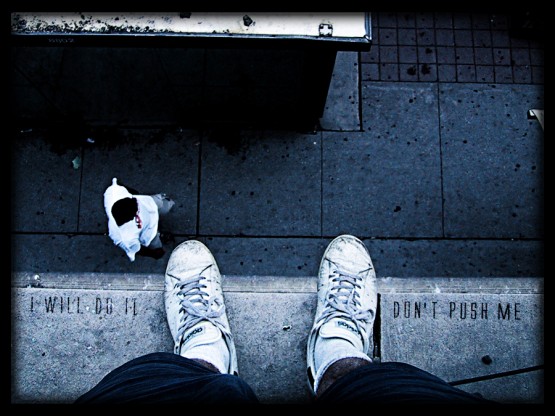 It became even less fortuitous when the “heavy” group was the first one sent to climb the stairs to the top of the tower. And the heavy group consisted of one person.  Me.

So I climbed and at the top were two young Chinese gals getting ready to jump. By getting ready I mean freaking out and doubling over and acting ridiculous. I decided on my end of the platform that if I walked over to jump, I would jump. The decision was not going to be made at the far end. No, the far end was not for deciding, it was for executing a decision.

One jumped, one walked down all of the stairs. It was my turn. I was called over, harnessed, and stepped up to the edge. Fear gripped me so deeply I knew there was NO WAY I could jump. I turned and told one of the workers, “I need you to push me!” and then I heard “Everyone please look up at the bungee tower to see a foreigner jump!”

What just happened? I was no longer jumping just for myself, I was jumping for the face and pride of every non-Chinese the world over. And then I was falling. Foreign and heavy and exhilarated! I can still close my eyes and be on the edge of that platform and physically feel it in the pit of my stomach. Fear and excitement mixed together.

All fear is not created equal

Fear can be tricky. Sometimes it’s our friend sent to warn us of dangerous situations. And sometimes it’s our foe sent to entrap and rob us. My heart was right to be afraid of the height, but what my heart didn’t realize is my head had been sure I was strapped in and followed safety procedures. On that day, my head was able (by asking for a good shove) to override my heart, resulting in an experience and life time memory.

How can we tell if fear is a friend or foe?

That mangy dog coming towards you, growling? Fear says, Don’t pet and watch out. Listen to this fear and you will be protected from potentially being bitten, needing stitches or rabies treatment.

I wrote about my greatest fear. What if China is what makes me and the story of my life interesting and without her, I’m dull. I fear I may not matter and people only listened to me because I was a bit exotic. This fear tried to keep me down and prevent me from good (but let’s not fool ourselves that good is a synonym for easy). Fear said, don’t risk, it will cost you too much. Fear offered me fool’s gold that would leave me impoverished in the end.

“Pay no attention to the man behind the curtain.” The Wizard of Oz says after Toto had pulled back the curtain revealing his true identity. He looks over his shoulder and sees Dorothy, The Tin Woodsman, The Cowardly Lion, and the beloved Scarecrow no longer beseeching the hologram on the wall with the booming voice, but staring at the man.

The ordinary man behind the curtain.

I am the ordinary woman behind the adjective.

It is the Accuser who wants us to believe that we have to have the persona of a Wizard to matter. To be of value. To have influence. And if we don’t we are not important.

Do not believe it.

My hope is we don’t throw the baby out with the bath water when it comes to fear. Fear is not the problem, it’s the voice behind the fear. Listen to the voice that protects and promotes growth in the name of healthy, God given fear. Learn to distinguish it from the voice of fear that seeks to destroy, hold captive, or isolate.

Linking today with Velvet Ashes and the grove: fear 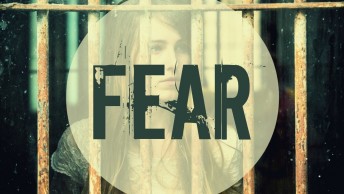